The UK's best cities for a spa day 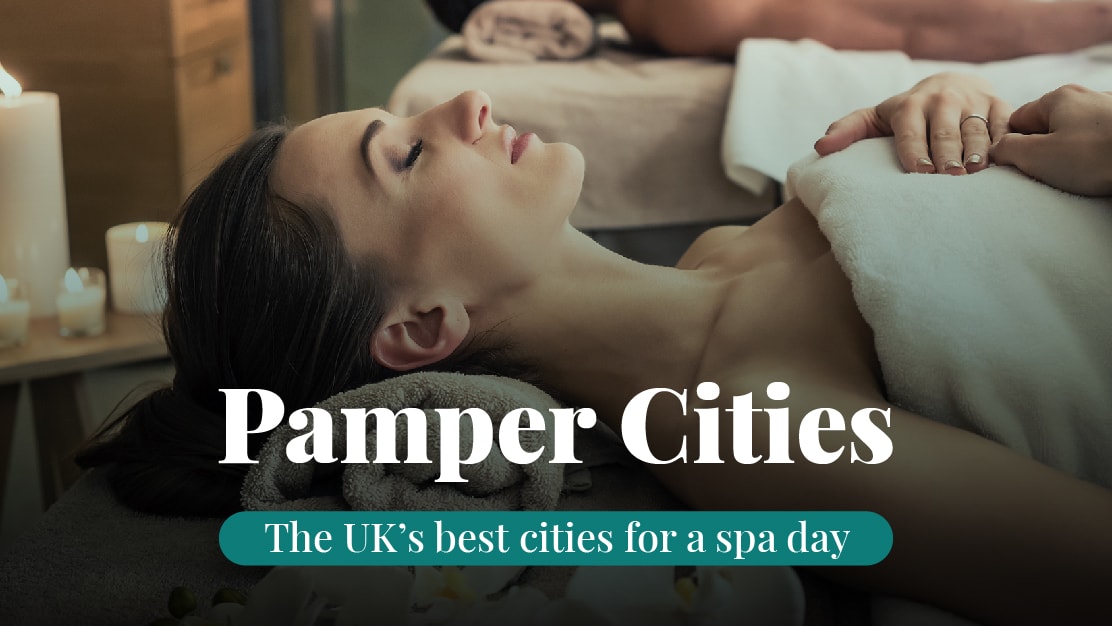 The evening comes and all you want to do is light some candles, apply a face mask and soak in lavender-scented mineral salts in your bath. However, when you're tired of doing all the work yourself for DIY spa days at home, you might look for a little escape.

The UK has countless towns and cities which are known for their culture, history and luxury spa experiences.

Here at AQVA, we investigated the number of spas and spa-related Google searches in the most popular UK and overseas destinations for spa getaways. The results reveal the best, and worst, locations for pampering. 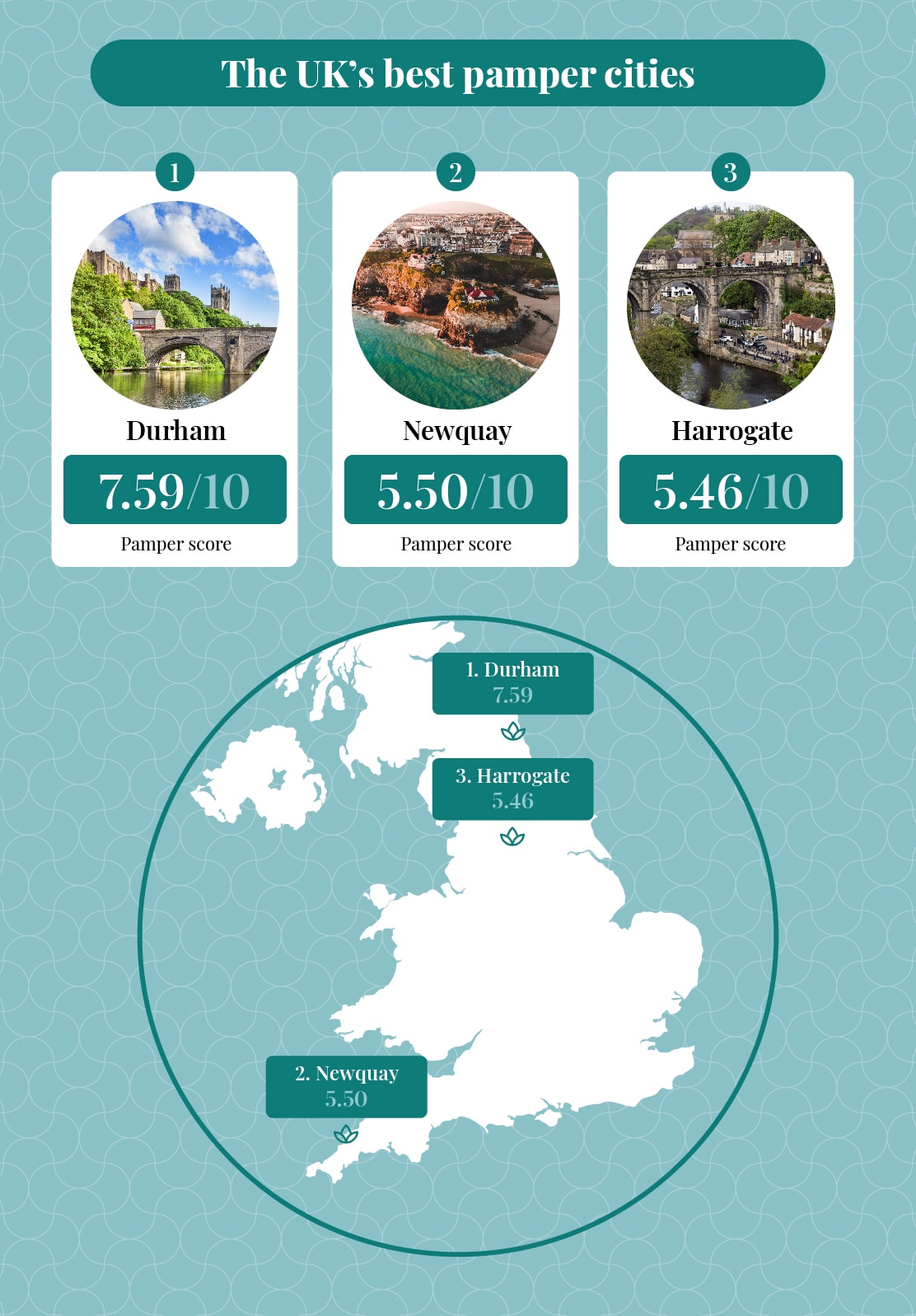 This historic northern English city known for the Durham Cathedral is also the best place in the UK to plan a relaxing spa getaway.

Whether you prefer a luxury stay overnight in a hotel, or to visit a day spa, Durham has one of the widest ranges of spas in the UK. With 7 for every 50,000 people and treatments ranging from Far Eastern rituals to water healing, there's no denying there is something to suit everyone.

Durham also beat all other UK cities by having the most spa-related searches in the past year - there were over 3,000 searches per 50,000 of the population in the last year!

Cornwall's best-known town for the seaside and surfing is also one of the most ideal places in the UK to spoil yourself.

With 14 spas per 50,000 residents, it's no wonder that Newquay is a go-to destination for pampering.

However, over the past 12 months, there have been under 150 searches per 50,000 people, for spa-related terms in Newquay.

Famous for its floral green gardens, Harrogate is a relaxation and spa hub.

It's no surprise this area of natural beauty is ideal for pampering. There are 10 spas in Harrogate for every 50,000 people, the most famous being the Victorian Turkish Baths.

Visitors can enjoy relaxing in rooms with Moorish tiled floors and arabesque painted ceilings right in the city centre.

In the past year, over 1,000 spa-themed searches per 50,000 of the population were made on Google from Harrogate. 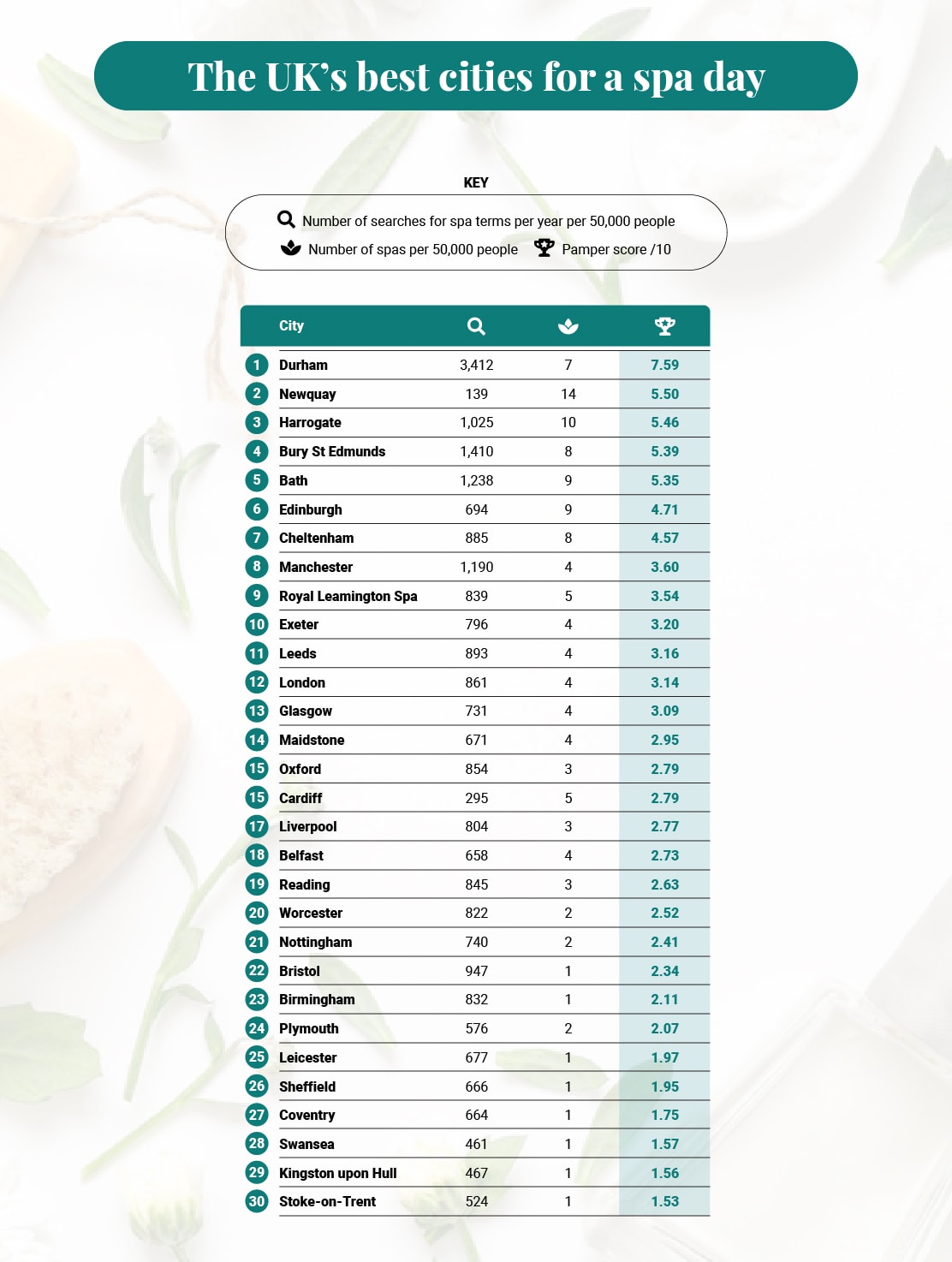 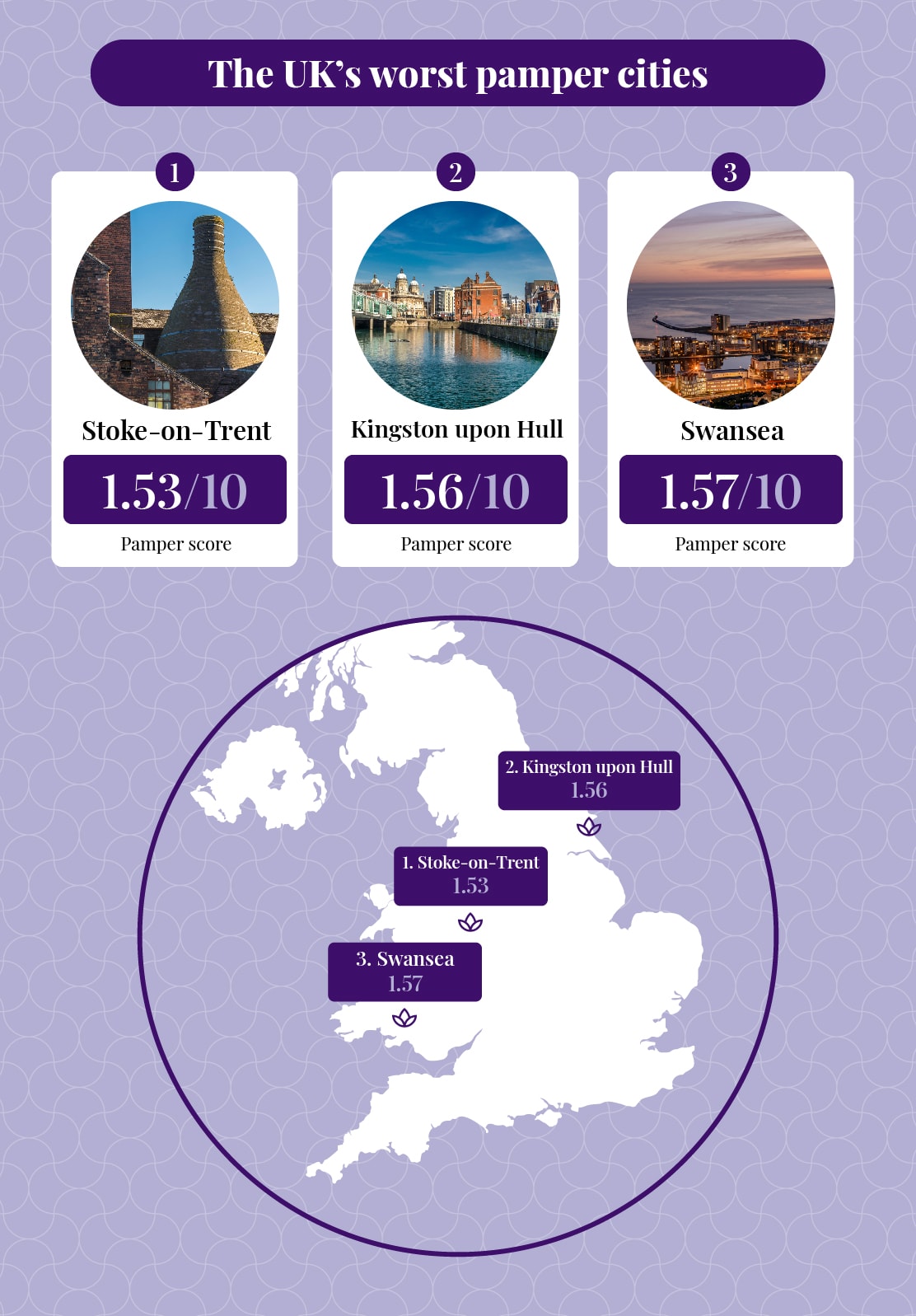 On the other end of the scale, the UK city at the bottom of our list is Stoke-on-Trent.

The city has a wide range of places for pampering, totalling at 14 spas per 50,000 of the population.

Stoke-on-Trent's Google data reveals they had just under 500 spa-themed searches in the past year per 50,000 people.

Although undoubtedly a city of art, history and culture, Hull ranks as one of the worst cities in the UK for a spa break. The Yorkshire market town has just 1 spa per 50,000 of the population!

It's clear to see that Hull isn't crazy about self-indulgence - under 500 searches for spa-themed terms were made in Hull over the past 12 months.

Another destination you might want to steer away from if planning a spa getaway is Swansea. Although on the coastline, alongside relaxing blue waters, this city ranks as one of the UK's worst for a spa trip.

For every 50,000 people, Swansea has just 1 spa, so there is less range and variety to choose from.

Over the past 12 months, there have only been around 400 searches per 50,000 people for spa-related terms from Swansea, placing it towards the bottom of our list.

The city with the most spa-related Google searches

Durham ranks as the top city searching the web for spas!

From a list of 50 popular spa-related terms and treatments, over 3,000 searches per 50,000 people were made in the past 12 months within Durham.

Durham, Bury and Bath, which ranked as the top-3 spa destinations in the UK, are also the top three for spa-themed searches.

The city with the most spas

Newquay is the UK location with the most spas per 50,000 people. The coastal town in Cornwall has 14 spas for every 50,000 residents, offering services from hydrotherapy pools to Cornish salt steams! 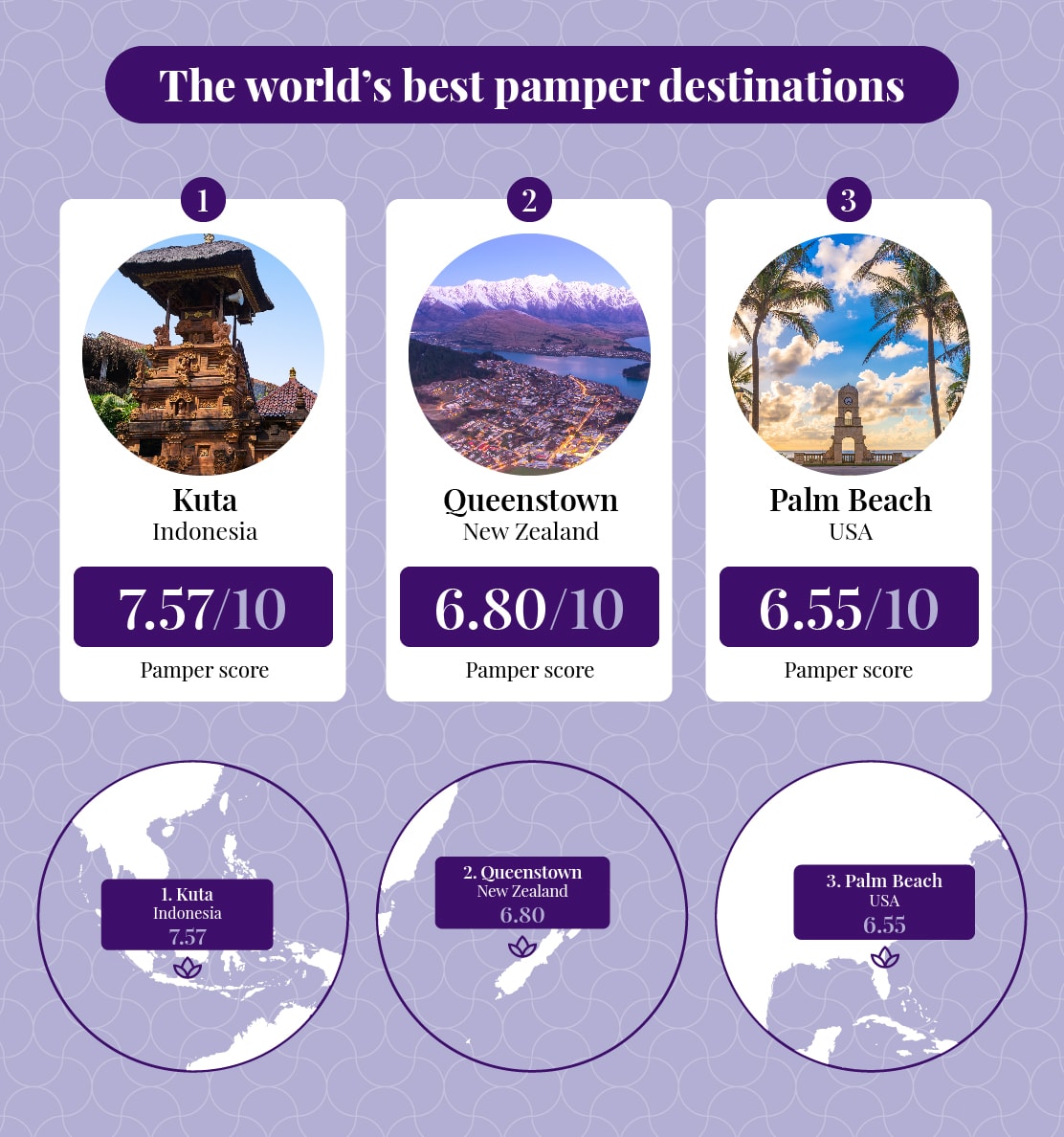 The city of Kuta is the capital of the beach resort Kuta District in Bali, Indonesia. Popular with tourists seeking a surfing experience or beach getaway, Kuta is the world's best city for a spa break.

The seaside resort has over 100 spas for every 50,000 people who live in the city, specialising in traditional Balinese massage and hot stone therapies.

Over 2,000 searches for spas and treatments were made in the past year from Kuta, so it's no surprise that it tops our list.

Not only is the city brimming with natural hot pools, but there are 78 spas for every 50,000 people!

Those in Queenstown are also making lots of searches online for spas and services - there were over 3,500 spa-related searches made in the past 12 months.

Palm Beach in Southern Florida is one of the world's top locations to enjoy a day of pampering.

Overlooking picturesque coastlines, at the spas in Palm Beach visitors can wake up to sun salutation yoga under the palm trees or cool down indoors with a massage. With 34 spas per 50,000 residents, the choices are endless.

Over 4,000 searches per 50,000 people were made here in the last 12 months - that makes Palm Beach the destination on our list with the most google searches for spa-related terms! 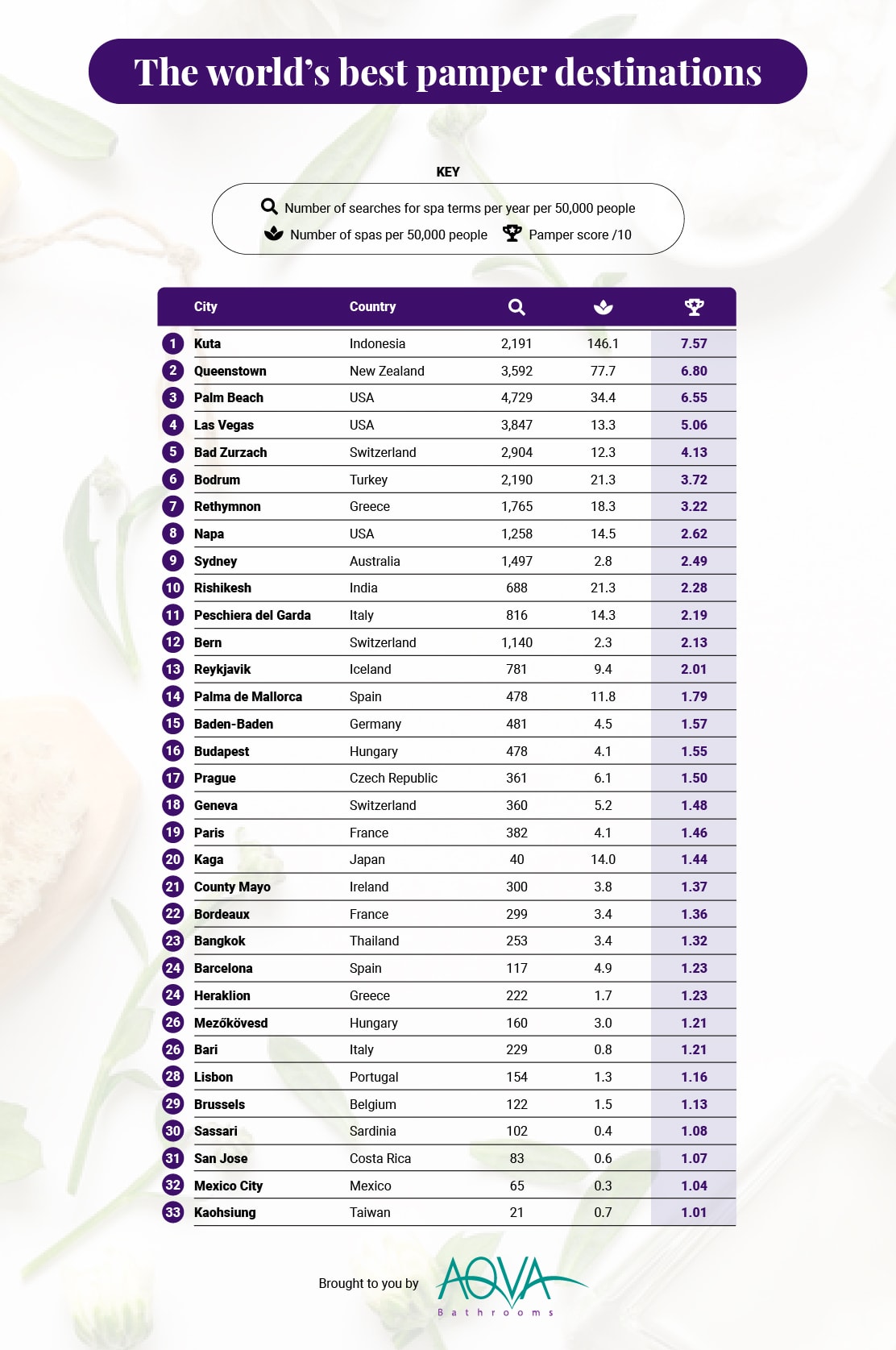 We compiled a list of the UK's best spa cities and the most popular global locations for spas and pampering using lists including those from SpaSeekers, Red, The Culture Trip, The Points Guy and Conde Nast Traveller.