JUN
What Is A Slipper Bath?
By AQVA Bathrooms Baths

What Is A Slipper Bath? 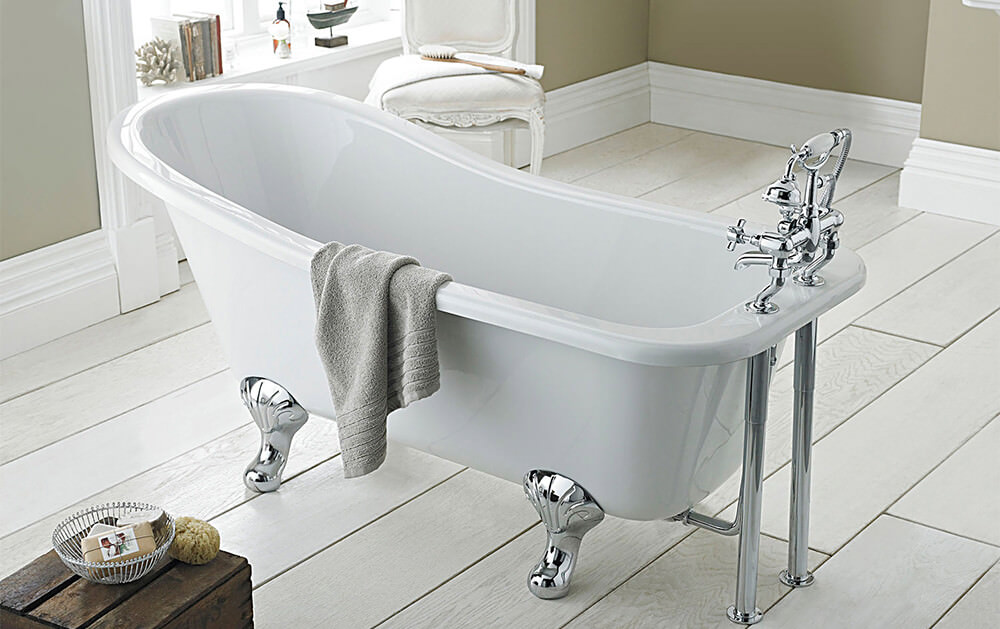 When talking bathtubs, the iconic slipper bath always deserves a mention. This stylish bathtub oozes elegance and sophistication and adds a touch of class to any bathroom it's found in.

Interestingly, slipper baths were hugely popular during the Victorian era, and this was mainly due to practical reasons. These days, the slipper bath has seen something of a resurgence in popularity. This time around, however, it's due to its function as well as its superb aesthetic appeal.

The slipper baths we see today are a far cry from the ones we've seen in images depicting the Victorian era. In this day and age, slipper baths have become incredibly stylish and comfortable – a lot more so than all those years ago. They are generally suitable for almost any sized bathroom and are available in a wide range of designs and styles. Slipper baths don't only suit more traditional décor either, they look great in ultra-modern bathrooms too. 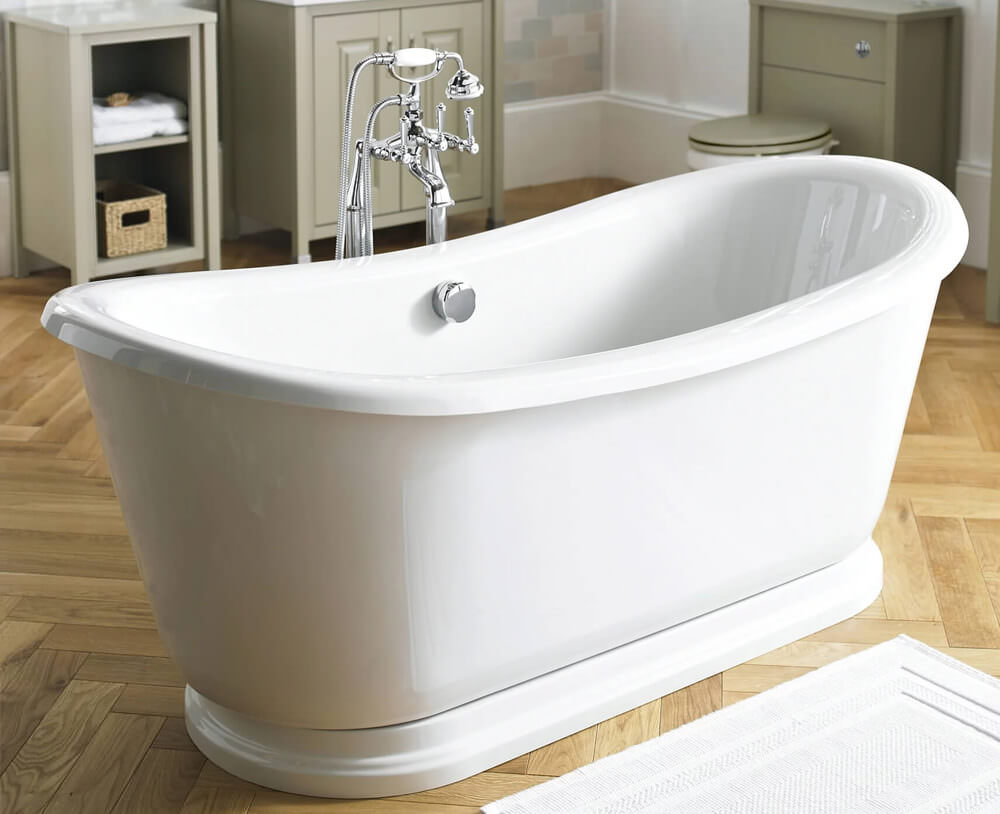 The slipper bath has been so named for its shape. The roll-top bath has one end that is curved higher, just like the end of a slipper. The higher, curved end of the bath offers more support for your back and shoulders.

Slipper baths are also typically quite deep, making them perfect for a long soak, and adding to their luxurious feel.

These baths are free-standing, which means that they are not attached to any wall or other type of fitting in the bathroom. They tend to stand on the ball and claw-style legs and sit a foot or so off the ground.


The History Of Slipper Baths 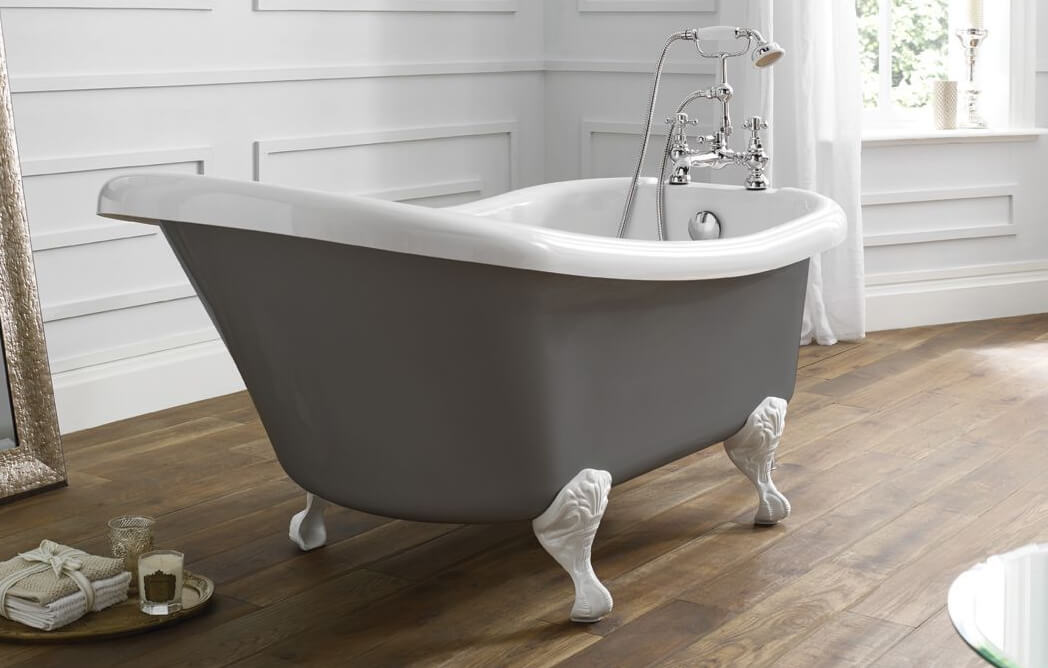 The slipper bath does indeed have quite the history!

During the Victorian era, medicine was not nearly as advanced as it is today. Diseases and ill-health were rife in the global population, and one of the best ways that experts advised the public to reduce their risk of contracting illnesses was to keep clean and bathe as regularly as possible.

However, the majority of working- and middle-class homes during that period of time did not have their own bathtub. When people did bathe, it would be in a small tub that was often placed in front of their fires.

Slipper baths were then first installed in public washhouses and bathhouses. These afforded members of the public the opportunity to have a bath in comfort and privacy. For the working class, they were a step up from a tub in front of the fire, but they were still familiar enough to be recognized as something you can bathe in.


What To Consider When Buying A Slipper Bath? 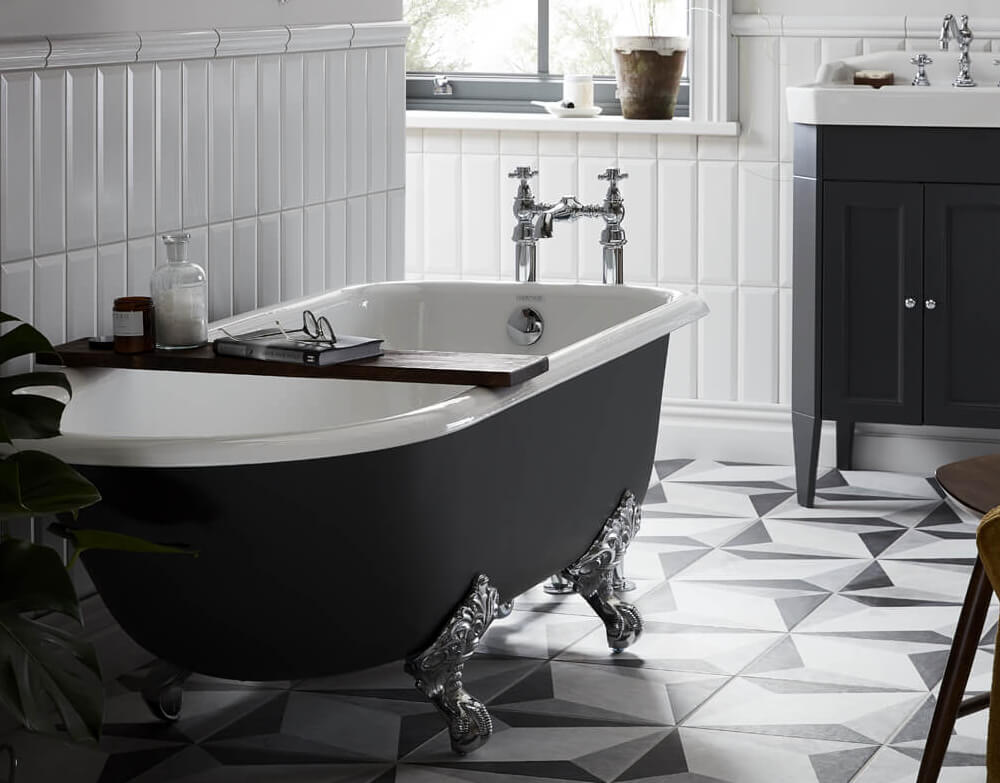 When buying a slipper bath, there are a few things that you need to take into consideration.

First of all, like all other freestanding baths, the slipper bath has been designed to be placed either in the center of the bathroom or just slightly away from the wall. This allows you to turn the bath into a feature, which could really bring a touch of elegance to your bathroom. However, you need to consider the space that you have.

If you have a tight space, you should look for a smaller tub. Some smaller tubs are much deeper, which will provide you with an upright bathing experience.

Another good point to consider is whether or not your new slipper bath can be plumbed where you want it to be. If not, you might end up spending more than the cost of the actual tub to be able to make sure that it has the necessary connections to the pipes.

Some slipper baths are available pre-drilled, while others will require drilling upon purchase. The latter might be best for those who need something a bit more customizable.


The Shape And Design Of Slipper Baths 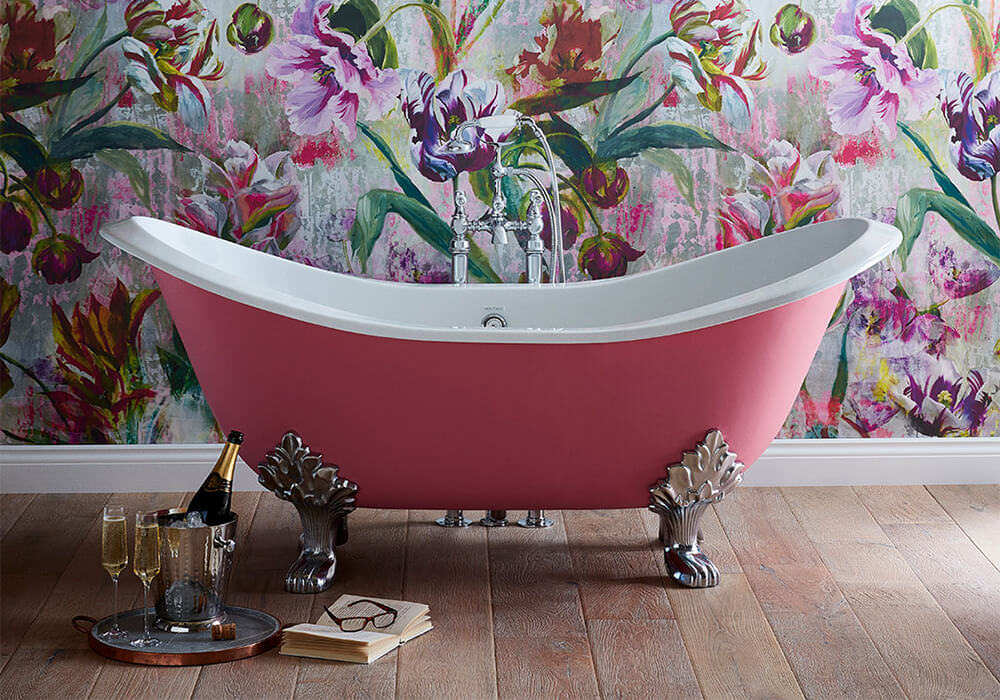 The slipper bath, with its higher curved end, was originally created to provide extra privacy. This was mainly due to the fact that most working-class people in the Victorian era would bathe in public cubicles. The deeper side of the bath also gives you the opportunity to relax in a bit more water, while the taps are placed at the shallow end of the bath (or on the side depending on your bathroom layout) so as to stay conveniently out of the way.

With the bath's rolled top, getting in and out of the tub becomes a bit easier. Furthermore, the shape of the slipper bath actually helps to keep water hotter for longer, leading to fewer refills and saving on power and water bills.

Slipper baths also make for the perfect space in which to relax and unwind. They have more of a spa-like feel and offer support for your back if you want to sit back and relax for a while. 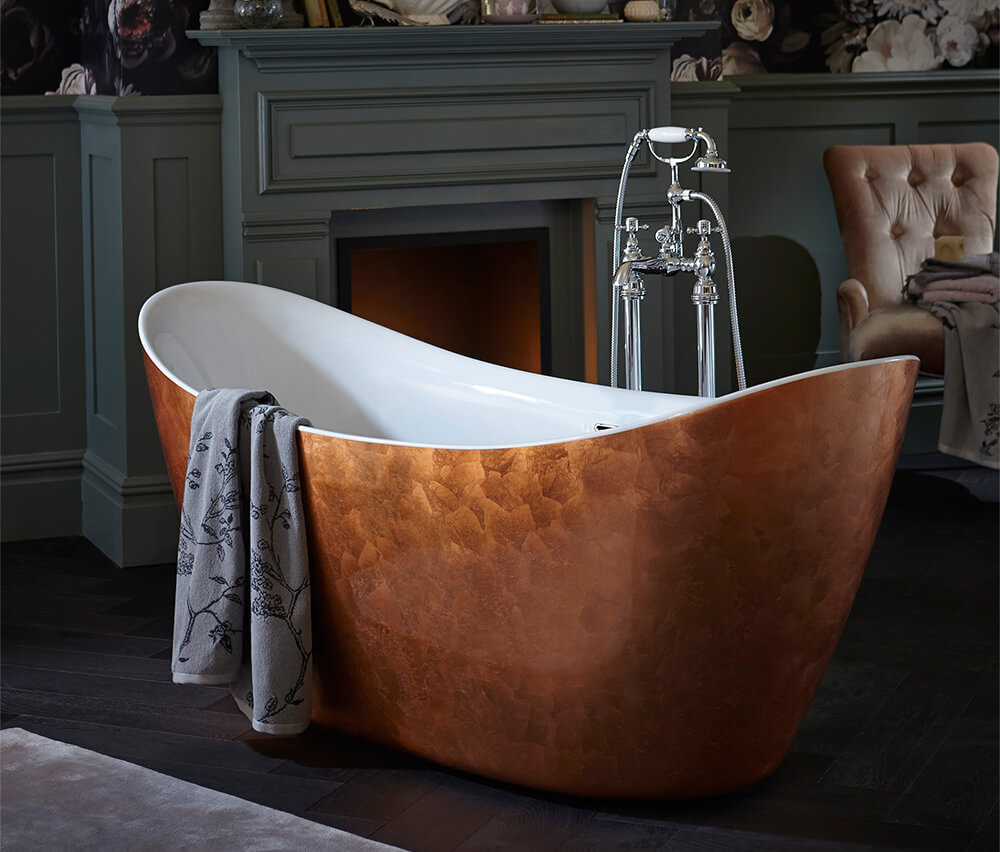 Originally, slipper baths were made from cast iron and enamel. This has proven to be incredibly durable and to this today, these materials are still widely used. However, as with most things, over time, more stylized options have been created, allowing for a level of personalization to be incorporated into modern bathrooms.

Acrylic and volcanic limestone are also being used alongside cast iron and enamel to manufacture slipper baths. Acrylic makes for an excellent heat retainer, which helps the water to stay warmer for longer. Plus, acrylic is also an easy material to repair, if need be, so any scratches or cracks can be filled with ease.

Volcanic limestone, on the other hand, has the ability to bring an almost-unparalleled splash of luxury to any space. This material also makes for a great insulator and is equally as durable. 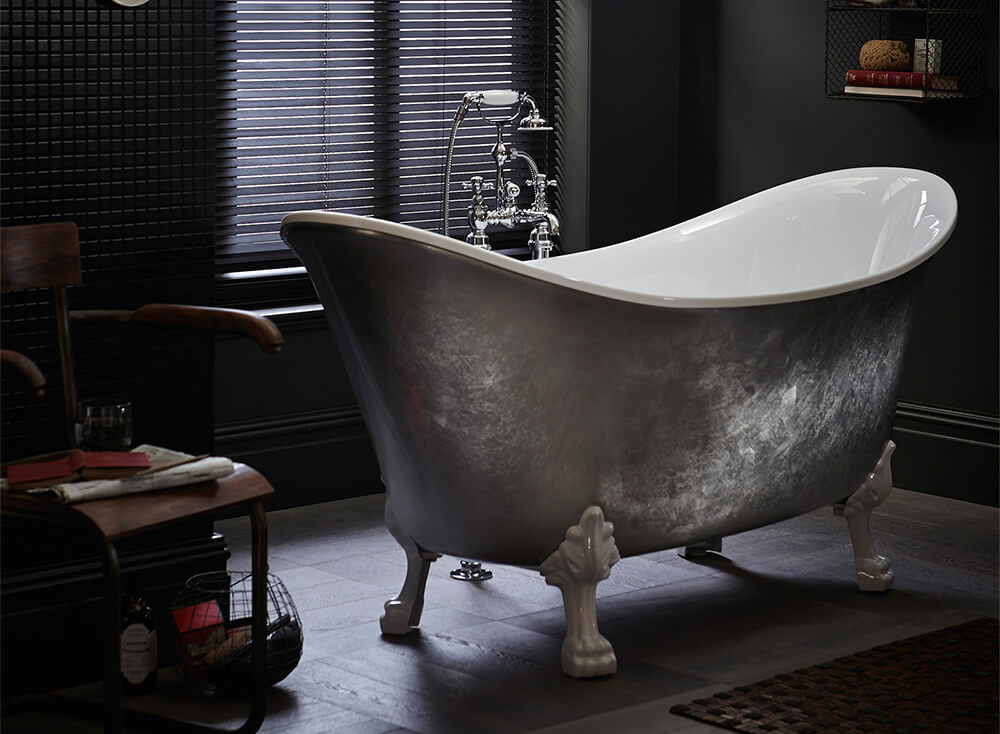 Everyone has different preferences and if you've never bathed in a slipper bath before, you're probably wondering just how comfortable they are? After all, they are hard!

Yet, most people find slipper baths to be more comfortable than any other shape of bath. This is because the tub's design allows them to sit a little bit more upright and to keep their backs supported. This certainly creates a more relaxing atmosphere and could make for the perfect spot to enjoy reading a good book while soaking.

The slope of the slipper bath does mean that the tub is generally not as long as other baths. However, they do make up for this in-depth, so the water levels can rise a bit higher. Additionally, the shorter length of the bath allows you to lie down in the water without feeling as though you're about to slip down at any minute.

Slipper baths are ideal for people of varying heights, including those on the taller side. With the back support in place of extra length, you can expect to lounge back in comfort.


Can You Have A Shower In A Slipper Bath? 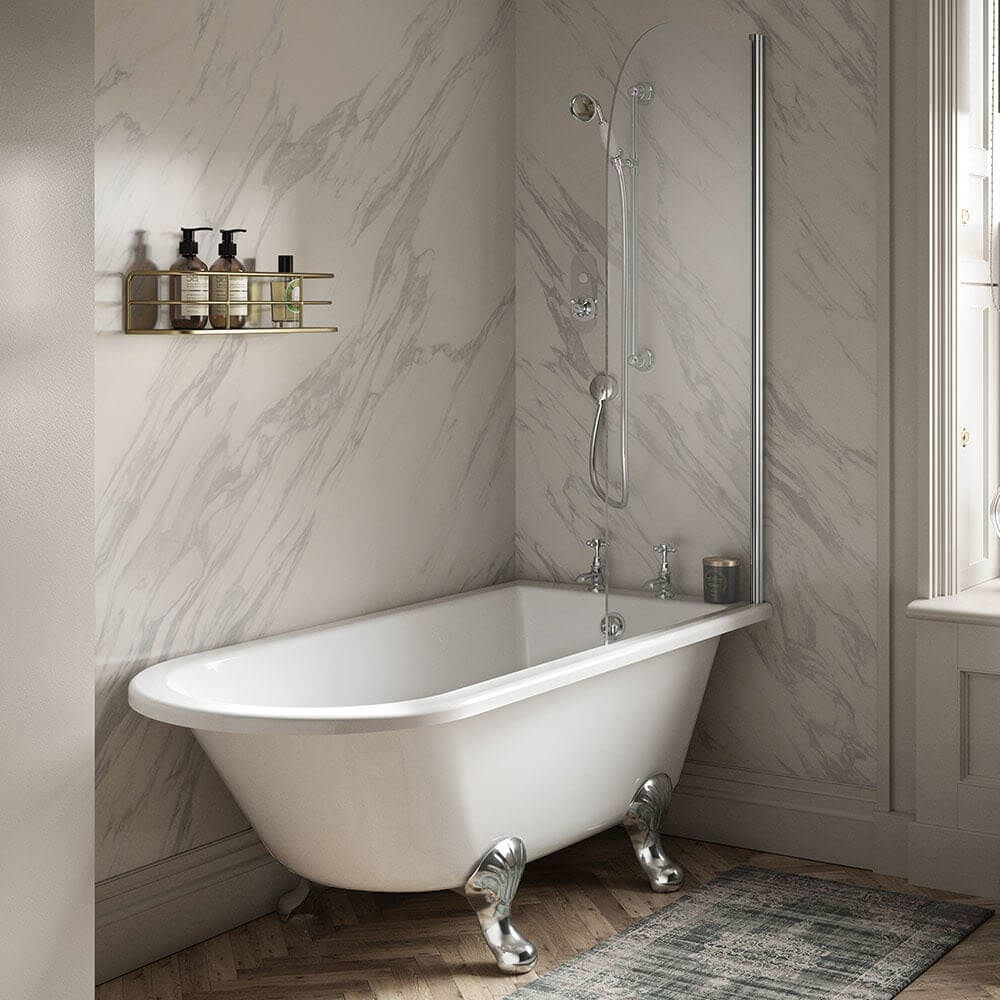 Shower baths have been a popular bathroom solution for many over the course of the past few decades. Being able to place a shower within the bath is also perfect for those with limited space, but who still want all of the flexibility of having both a shower and a bath.

The shape of the slipper bath makes it a little more complicated when adding a shower in the bath. But it is still entirely a possibility.

Perhaps the easiest thing to do is to simply invest in a handheld shower attachment. However, this does not necessarily work for everyone, as many people prefer to have traditional wall-mounted showers.

Wall-mounted showers are possible with a slipper bath, but you then have to be very careful and particular about where the bath is placed. Keeping the fact that the slipper bath is designed to be a bit of a distance away from the wall in mind, a wall-mounted shower is only really possible if the showerhead is placed directly in the midpoint of the bathtub.

The showerhead then needs to have quite a long arm to be able to reach you without splashing water on the floor between the wall and the tub. There are numerous options available for those who would like to explore this route, just remember that you'll probably need a rail and a shower curtain too! 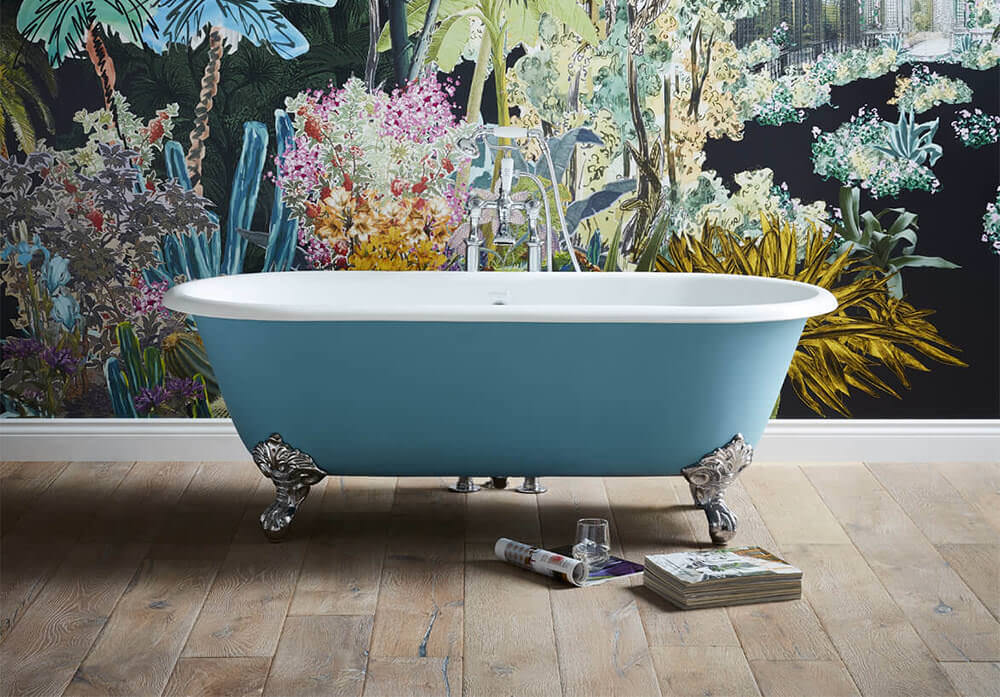 As slipper baths have never really stopped being a popular option for renovating or building a new bathroom, there are plenty of brands that manufacture them. These are all held to the highest standards of quality and hold varying periods of warranty.

At AQVA Bathrooms, we make sure that every tub sold by us is manufactured with only the finest, most durable materials. This helps us to ensure that you are able to enjoy your bathtub for several years to come and that it becomes one of the highlights of your bathroom.

The slipper bath brands available at AQVA Bathrooms include:

If you want your bathroom to make a splash and you love soaking in the tub, a slipper bath may well be the perfect choice for you.